Introduction: Bradykinesia is one of the main motor symptoms in Parkinson Disease (PD). Studies have shown that patients with PD exhibit bradykinesia because they have difficulties integrating multi-sensorial information, mainly proprioception, leading to difficulties in modulating the velocity of self-paced voluntary movements. We hypothesized that stimulation of aponeurotic tissues of the upper limb, which contains numerous types of mechanoreceptors, could therefore have a therapeutic effect on PD-induced bradykinesia.

Method: We investigated changes in bradykinesia in patients with PD after aponeurotic stimulation (AS) of tissues of upper limb muscles with a metallic hook, according to the diacutaneous fibrolysis method. A control group received placebo stimulation (PS) that consisted of manipulating the skin over the muscles that were the targets for AS treatment. We assessed symptoms of bradykinesia in a total of 10 patients with PD in terms of movement velocity for upward rotations of the outstretched arm and in terms of UPDRS motor score, before and after AS or PS treatment.

Results: Parkinson’s motor symptoms, as measured by the UPDRS motor scored, decreased for the AS group from 31.3±13.2 % to 26.8±12 % (p<0.003), whereas for the control group there was no significant difference after PS treatment. AS treatment also led to an increase in peak velocity at the shoulder (8.1±1.3°/s before vs. 10.2±1.1°/s after; p=0.037), whereas the placebo treatment induced no significant modifications.

Conclusions: The results of this pilot study suggest that aponeurotic stimulation directly improves motor output, with the potential of alleviating bradykinesia in patients with PD.

Current knowledge attributes movement disorders in PD to a dysfunction of the basal ganglia-motor cortex circuits, but it is also known that abnormalities in the processing of peripheral afferents may interfere with movement execution [1]. Studies have shown that patients with PD rely excessively on visual information to guide movements [1–3] and that they present deficits in the conscious perception of limb and body motion (i.e. kinaesthesia) [4]. Exploring rehabilitation possibilities for PD-related movement disorders via sensory stimulation is therefore very attractive, especially since cutaneous and proprioceptive stimulation strongly activates both the olivo-cerebellum and basal ganglia networks [5–6]. In this light, we hypothesized that diacutaneous fibrolysis method, a form of aponeurotic manipulation, could be beneficial. By applying this approach on the triceps surae, Vezsely et al [7]. Showed that dorsi-flexion at the ankle increased while passive tension decreased. More importantly, tendon reflexes decreased, indicating a modification of proprioceptive information processing. To the extent that sensory processes may underlie bradykinesia in PD, aponeurotic stimulation could affect, and hopefully alleviate, some of these symptoms.

Ten participants gave written consent and the Ethical Committee of the “Hôpital Brugmann” (Brussels) approved the study. Table 1 shows the characteristics of each participant. Each participant continued their usual medical treatment and for those using deep brain electrical stimulation (DBS), the stimulation was turned on during the experiment.

Participants performed a pointing task consisting of an upward rotation of the outstretched arm around the shoulder joint, initiated after a self-timed delay. Patients were seated in front of a panel showing two targets and pointed at these targets with a laser pointer fixed to their index finger (Figure 1A). Movements of reflective markers attached to the upper limb were recorded in 3D at 100 Hz with an optoelectronic device (BTS Elite System).

An experimental session consisted of 10 pointing movements performed before and after 45 minutes of AS or PS treatment (see below). At the beginning and end of the session, a therapist performed the UPDRS test (part III: Motor evaluation) [8] concerning motor function. One week before the recording session, each patient was trained to perform the pointing movements at their own ‘natural’ velocity. 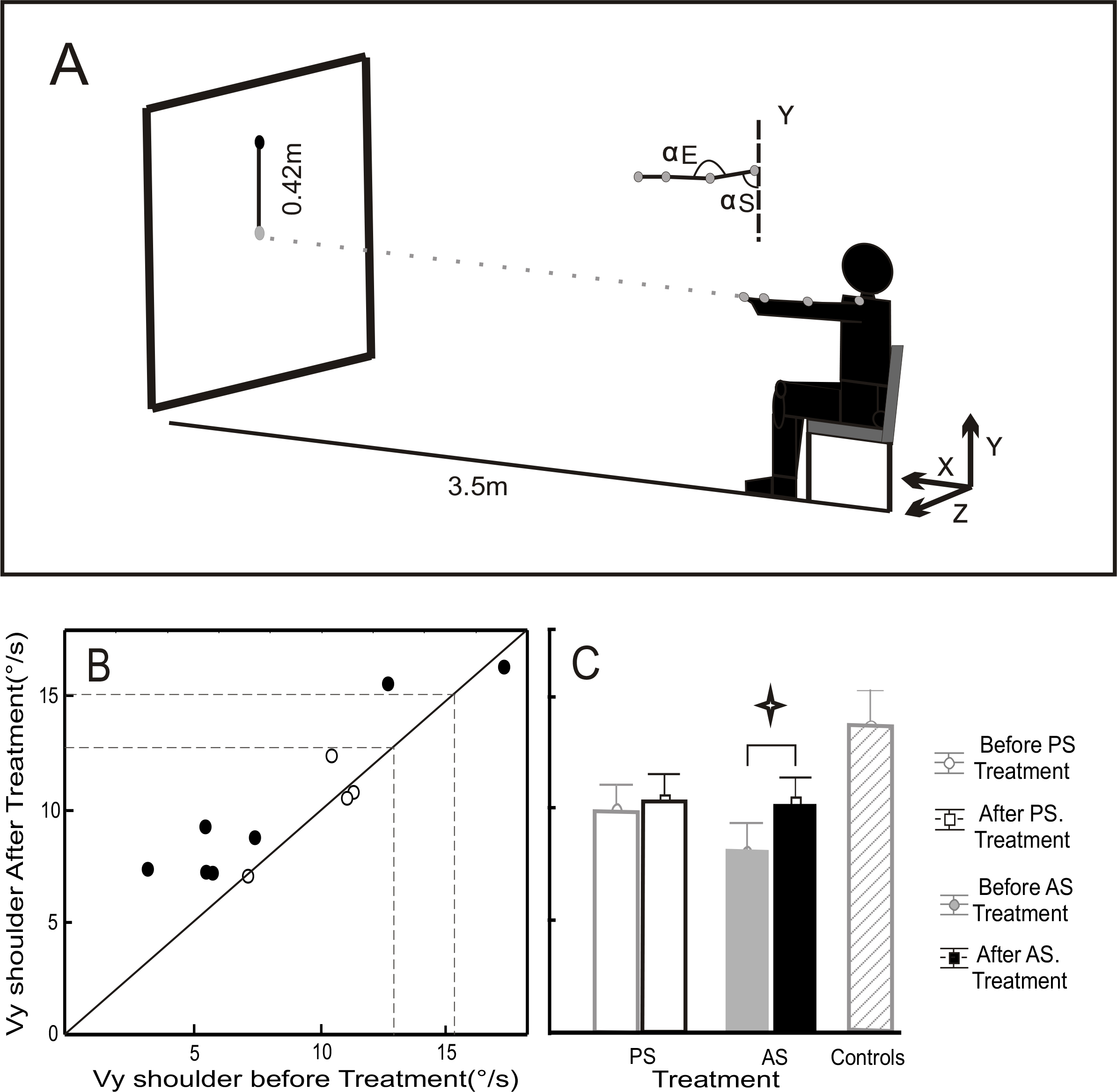 A) Experimental conditions. Seated subjects pointed with a laser to targets (diameter of 4 cm) located at a distance of 3.5m. The starting target was in the middle of the panel and the ending target 42 cm above. They were asked to perform the movements with the upper arm in an extended position (shoulder movements around a nominal position of 90° flexion, with the elbow fully extended).

C) Mean and SD for Vy before and after PS and AS treatment, and for healthy control subjects.

A second therapist imposed passive movements of the patient’s shoulder and elbow used to localize the muscles manifesting the greatest rigidity. In general the main muscles manipulated were: the superior or inferior trapezium, the anterior and posterior deltoid, the external or internal rotators of the shoulder, the pectoralis major, the triceps brachii and the brachialis. AS treatment consisted of back-and-forth displacements of the aponeurotic tissues enrobing the heads of the target muscles, applied by a hook perpendicular to the axis of the muscular fibers. PS stimulation consisted of manipulating the skin over the same target muscles. The second therapist was the only person to know if AS or PS was applied to a given patient.

We computed the peak angular velocity for rotation at the shoulder (Vy) from the 3D marker data for each pointing movement. Statistical analyses consisted of repeated measure ANOVA (Statistica®, StatSoft) with treatment (AS or PS) and repetition (before or after treatment) as within-subjects factors, applied to Vy and to UPDRS scores.

Table 1. Profile and clinical features of subjects. UPDRS score for part III (Motor evaluation) and scores on selected items before and after treatment.

We then assessed what items of the UPDRS presented the main changes after treatment. Table 1 shows the values before and after treatment for 6 specific items (the values correspond only to the treated upper limb); 3 of them corresponding to the ‘triad’ of main symptoms of PD disease and the 3 others corresponding to hand movements. It is interesting to note that treatment produced a significant cross-effect between the ‘hand’ and ‘triad’ groups (F(1, 9)=6.024, p=0.04). After treatment the mean of hand-movement items decreased from 1.36±0.16 to 1.06±0.18 (Bonferroni post-hoc p<0.01), whereas the mean values of the triad symptoms remained stable (1.26±0.13 and 1.23±0.15, respectively).

Figure 1B shows Vy measured for our participants, compared to the mean±SD of “natural” shoulder velocity for 10 healthy control subjects (area between dashed lines) who performed this pointing movement after the same training as our patients. Patients presented significantly lower Vy on average than the control group (8.8±0.8°/s vs. 13.8±1.5°/s), however, we found no difference in Vy between our two patient groups prior to treatment (8.2±1.3°/s for AS vs. 9.9±1.9°/s for PS). Repeated measures ANOVA showed a significant main effect of test period (before and after treatment) on Vy (F(1,9)=5.7, p=0.04). Bonferroni post-hoc tests showed that treatment modified Vy only for the AS group (10.23±1.13°/s after versus 8.17±1.28°/s before; p=0.037) whereas the PS treatment induced no significant modifications (Figure 1C).

Aponeurotic stimulation increased the shoulder velocity for vertical pointing movements (Vy) and improved the velocity of hand gestures (UPDRS’s items), indicating a decrease of bradykinesia in our PD patients. It is worth noting that our participants performed these movements under conditions that increase the risk of bradykinesia, because they were voluntary, internally driven movements with accuracy constraints [9] and because repeating movements makes the symptoms more prominent [10]. It is also worth noting that our treatment produced a positive effect on the UPDRS items concerning repetitive sequential movements of isolated fingers, hand and wrist (items 23, 24 and 25 respectively).

More research is needed to understand the mechanisms of motor output improvement brought on by the aponeurotic stimulation. Whatever the cause, however, the results from this pilot study indicate that aponeurotic manipulation could provide a new therapeutic approach to improve the quality of every-day movements in patients with PD.

This work was funded by the Belgian National Fund for Scientific Research (FNRS), the Research Fund of the Université Libre de Bruxelles (Belgium), the Belgian Federal Science Policy Office, the European Space Agency (AO-2004, 118), the FP7 support (ICT-247959-MINDWALKER). The authors thank J. McIntyre for fruitful comments about the manuscript, J. Burnotte for teaching all the subtleties of the aponeurotic technique, all the persons who participated in the study, the LNMB team for rich discussions, E. Hortmanns and T. d’Angelo for expert technical assistance and C. de Scoville for administrative assistance.