New field theories considering new re-interpretations of field observables are used in a wider context to be applied in the design and development of energy technologies to fine different applications through the spectra of field observables and the particles interaction that act in the shedding, correction, alignment, cure, re-directing of the fields to different process. In it are of our interest those applications to Nano medicine and design of biomedical devices at quantum level. Also are mentioned some parallel developments realized in this respect.

New Theories, New Re-interpretations of the Knowledge and New Tools to the Next One Hundred Years

New postulates and principles have been considered as given in [1,2] where the torsion field theory has been embraced by some as the scientific explanation of homeopathy [1,3], electromagnetic propulsion, magnetic levitation [2], and deep studies of the development and evolution of the Cosmos or space-time [4–6]. All before phenomena are related beyond the terrestrial technology and are connected under the same topological field theory and principles considering the same field theory developed through algebraic geometry and mathematical physics. In this respect, are used frequently the cohomological spaces as of the type H1 (B, O(–k)), to explain and demonstrate the correspondences between helicities of the “quantum” fields bundles and the spin actions in spin manifolds developed. Last mentioned may be to the twistors (mini-twistors, ambitwistors and etcetera) in the correction and restoring of fields, or the introduction of the intention to transform a space, matter, body, organism or ambient of the any type [7].

The twistor geometry created Penrose [8], has been useful to describe from a point of view of the sources (that are singularities in usual differential geometry), the possibility to use the geometry created from start of these singularities. This last re-interpretation has been developed and also used in diverse research by me. However, has been necessary add some new concepts realising research in derived categories to explain the equivalences and different dualities that arise in this study.  In this new context, also arise the identification problem of the different topological groups or Lie groups that define the symmetries and other gauging actions in the interaction with the elements that offers the Universe. Recently, was realised a research on the field observable study and the duality of invariants in the Universe field equations through twistor-spinor framework in spectral theory of curvature to detection of gravitational waves [9].

In the last theme relative to the deep studies of the Universe, I have given several results that incorporate the fundamental principles of the matter in gravitation and a new re-interpretation of field observable under co-cycles defined in vector topological spaces [10–12]. However, these results go beyond treat to give a precise description of how functions the Universe from their Higgs boson [11].  Also are searched and wanted technologies, which derive of certain theorems to develop sensors and transducers of the field observable, having as final goal the creation of an advanced sensor of quantum gravity (see the figures 1 A), B), C) and D)) [13].

Also are of interest the quantum communication (telepathy, telekinesis, [15]) and the levitation (for example, this understood as the production of electro-antigravity described in the papers [5, 16, 17]. Here again we have used a cohomological space seemed to before, considering twistor geometry to describe the action of a rotation ring and their magnetic field in the movement of the ship in magnetic levitation).

In the mind phenomena as the clairvoyance and extra-sensorial perception [15], and other paranormal phenomena are had the same principles established to define field conscience by operators [18] in an integral operators theory that join the quantum mechanics with the relativistic and macroscopic theories of the Universe. Here under these arguments, are demonstrated that the second theories (relativistic and macroscopic theories) in reality are consequences of the quantum theories. Disorders in the mind are quantum perturbation generating coercive charges given energy weight that provoke the appearing of symptoms in the mind (see figure 2).

A). Curvature in microscopic level to analyse microcrystal deforming. B). Distribution of Neutrinos in the Universe [12, 14].
Figure 1. Field Detections through dilatons or gauge fields in the space-time and their relation with the SWAP mapping. Detection of the super-massive object (singularity) through sensor device to detect and measure quantum gravity using the fermionic spectral behaviour. Could be that the Universe field is the master control on our mind? If this is true then a good managing of photons as bosons of certain class could be the solution to all mental illness.

Figure 2. A). How begins the anxiety and their disorders? B). ……..what happens with the symptom space?

The application of torsion fields in medicine has been determining. Everything cure can be possible from photonics cure devices (including devices that cure all sickness such and as my hypothesis [1, 3] given to explain the appearing of organic illness and the re-composition of the fields by codes given by path integrals (Bulnes-Feynman integrals [1] to obtain the health).

Remember that one of my postulates and principles in the formal engineering theory is that the engineering is the creation of technology on the energy. Because, all is energy and as has been planted and demonstrated in a work [13], the Universe is all of energy because the unispace or universal covering is all of energy. The realised argumentations were done the global analysis that uses the universal covering of a Lie group with the causality (or causal structure).

This study consider the causal structure of the scattering phenomena through past and future light cones,  create the possibility of energy for one thousand years, perpetual motion  machines and star-gates (worm holes in the space) with advanced analogues as the synchrotronic propulsion (advanced spaceships)  and disintegrative mass weapons, using the same principles in all case.

Torsion fields can interact with laser beams (change frequency); creating effects of diverse, for example, in the biological processes, where torsion affects directly the ADN. Also can melting or solidifying some materials, affect quartz crystals increasing their properties as resonators. Also, affect some electronic components creating radiation coverings. The torsion can favourably change some beverages, and have been noted to affects gravity.

New theoretical developments have been given in quantum field theory[1], more specific in micro-electronics, realizing research on advanced electronics, photonics and spintronics[2], in the problems of electromagnetic propulsion, nano-medicine, sensors of field observables and transducers. Here is necessary to detach the importance of the obtained results in these research lines in electronics where have been complete theories with prototypes to detection of quantum gravity, cure of all illness, storage of energy through curvature and torsion energies, concept created [19, 20] to can to build the devices with technology on particles, fields, radiation and waves. Likewise, can be affirmed that the prospective in the use of the energy process of the electrons managing will give major developments of the advanced electronics considering no only their photon but also the use of their spin giving as result the spintronics [21]. This last also consider to the electron as the fundamental particle in all the processes of transference and information to the managing of other particles considering basal and transitory states of the electron through technologies, as are the dots, magnetons or spin-transistors.

Based and supported by important contributions and theorems on the deep study of the Universe, much of this research has been realized. Then have been given results in algebraic geometry and mathematical physics and published in the British and American journals of mathematics: Theoretical Mathematics and Applications [26], and other mathematics research journals [27].

However, the vision of the research in field theory goes beyond the matter and molecular level. As has been mentioned in biomedical research scenarios [28], any illness begins in the atomic level through a collateral atomic damage when voracious protons are eating unstable electrons whose electronically information through photons is erroneous, and provokes the exit of these electrons attracted for voracious protons outside of the atom.

The electronic hypothesis in this respect can be detected for field variations of the vital field, or deviations of this field in their geometry. Of fact, integral geometry elements are incorporate to explain and determine this field deviation for their energy spectra. There is a report of these talks in the Current Medical Chemistry Journal [current], which has included the most famous scientific reports in advanced research in medicine and their different areas. In this important and prestige journal is included a complete scientific report in nano-medicine [28].

Here is planted the possibility of cure through the energy scanner of the human body to different organic systems using their different spectral resonances.

The research developed through different and various papers [29–31] shows through advanced mathematics the interchange of particles required to spill in the damaged part of the body of the photons required to correct information of their atoms. Then is corrected and restored the vital field and with it we achieve the obtaining of cure. He uses a version of the Feynman integrals to explain the interchanges and actions through the energy paths of the particles (see the figure 4).

Figure 3. A). Liquid light to help to the development of future advanced electronics in the threshold of the spintronics in the transducers design.  B). Direct sum of H-states to establish the curvature energy by the field ramification. C). Surface of energy E(k1, k2), to a metallic structure whose energy and prohibit trenches of energy in the solid were obtained applying a elementary electric charge that produce a planar constant superconductivity [20, 22–25].

However, these researches were beyond the organic sufferings arriving to the conclusion that all suffering or illnesses have an origin metal in the mind-body. Likewise, is concluded in a research presented in an international conference [30] that “…all is reduced to correct and recover The WILL…”, “…the will is all”.

A graph is showed on the possible correction and restoring of the will compensating the energy displacement required by the cure (see figure 5). 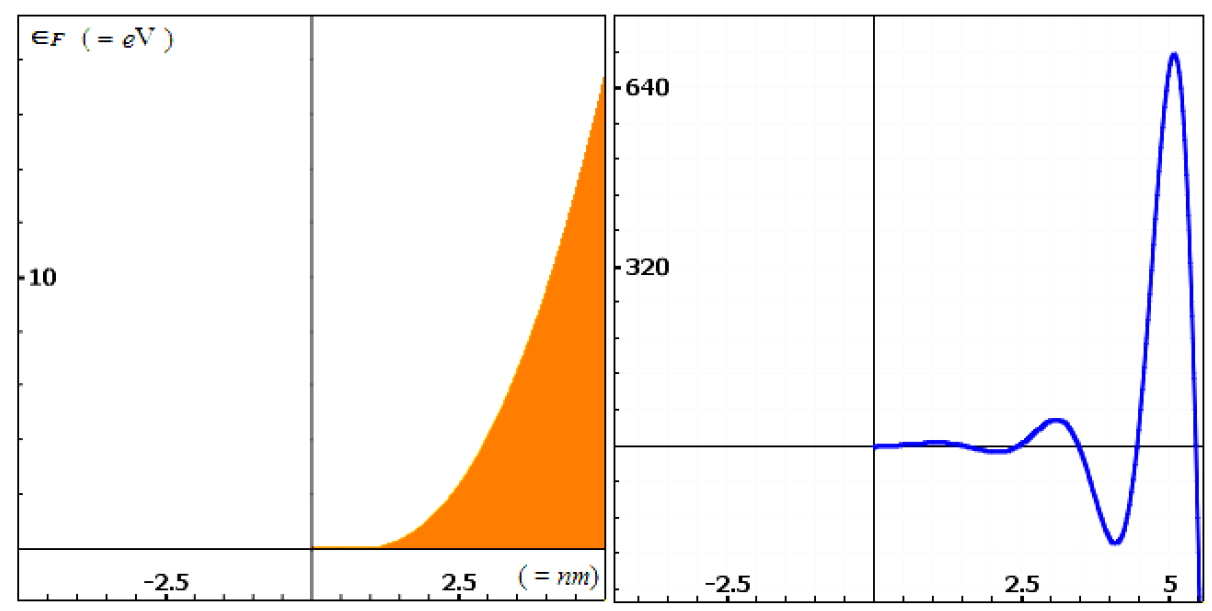 Figure 5. Fill of incomplete atoms with free spaces for lack of one electron even of the order of their Fermi energy ∈F. This distribution is analyzed for the mono-pharmacist Pulsani considering an analytic electromagnetic potential ϕ(x) = x2(1–e–x)log(x), [=nJ].

By the property recognize + displacement = ϕ(1)δ(0 – 1) + δ(1)u(0) (Theorems F. Bulnes applied to nano-medicine and radionics) with an evolution change given by exp(tX), we have the curve of recovering of the will. This graph corresponds to the action of Pulsani quantum mono-pharmacists. The continuous strengthen of the will [30].

Now recently have been realised an incursion on possible photonics and radionics developments on bio-medical devices adding research of photonics and spintronics, from the QED (Quantum Electrodynamics) and recent results in theoretical physics obtained and published in archival physics.

Likewise, is published an important theory of these devices linked with the study of some quantum complements and organic metal complements rich of certain class of photons that enrich the cure power and action of mono-pharmacists in quantum medicine and nano-medicine. In this research are explained possible mechanism to cure any illness from quantum level (figure 60).

A problem that has been presented in these researches is the fine nanometric gauging of quantities of the energy that can be registered in electronics devices, because these devices to experiments have been not invented yet. However, are established at least in design level possible quantum electronic devices to the correction, detection and alignment of energy fields of the human body [29–32].

[2] I am Editor-in-Chief of the Journal on Photonics and Spintronics, in USA. See: http://researchpub.org/journal/jps/editorial%20board.html