We report a case of Lyme disease, revealed by pancreatic damage in a 49-year-old man without any medical history. The Lyme disease was revealed by repeated abdominal pain for 4 weeks, a skin lesion of quadricipital region, biological and radiological results showing pancreatic abnormalities.

A 49-year-old man, non-alcoholic forest worker, with no past medical history, consulted to the Emergency Department for fever and persistent abdominal pain for a week. The biological results including, C – reactive protein (CRP), lipase, hepatic assessment were normal as well as contrast-enhanced abdominal Computed Tomography (CT). On the day after, the evolution was favorable under symptomatic treatment including nefopam and paracetamol and the patient was discharged from the hospital. One week later, the patient was admitted to the Emergency Department with an identical symptomatology. A posterior quadricipital peeling skin lesion, appeared two weeks earlier according to the patient, was observed (Figure 1a.) A gastroscopy, a colonoscopy, other abdominal CT and biological tests were performed. An inflammation biomarker elevation was observed (CRP: 180 mg/L and hyperleukocytosis: 13.3 G/L) without other biological abnormalities (lipase: 48 UI/L, ALAT: 48 UI/L). The endoscopic examinations and abdominal CT were normal. The patient was discharged from the hospital without any treatment. Half a month later, the patient was admitted to the Emergency Department for the third time and recurrence of the abdominal pain. The clinical examination found a hemodynamic stability, an abdominal pain of the left hypochondrium associated with a cutaneous ulcerative and non-progressive skin lesion in the same region as previously mentioned (Figure 1b.). The biological assessment found a very mild inflammatory syndrome (CRP 86 mg/L, Procalcitonin < 0.2 ng/mL, leukocytes 9.5 G/L), a high lipase level at 1714 IU/L without hepatocellular abnormalities. The third abdominal CT revealed an aspect of pancreatic necrosis with a pseudocyst (6 cm) at the tail of the pancreas, in contact with the splenic hile and the posterior wall of the stomach (Figure 1c.). The patient was hospitalized in Intensive Care Department with the diagnosis of pancreatitis.

On admission, the work-ups looking for the usual causes of pancreatitis (alcohol, gallstones, medications induced, hypercalcemia, traumatic, chemical exposures, hereditary diseases, infections) were negative. Regarding the skin patient’s lesion and anamnesis, the diagnosis of Lyme disease was evoked. His Lyme serology was strongly IgM positive and confirmed by Western Blot. He was treated with ceftriaxone associated with effective analgesic therapy. The clinical and biological course was uneventful and the patient was discharged from the hospital after 3 weeks. The relationship between Lyme disease and acute pancreatitis was strongly suspected.

Lyme disease is an endemic zoonosis, transmitted to humans by a tick bite causing a multisystemic impairment due to a Gram-negative bacillus, Borrellia burgdorferi [1]. The disease schematically includes two phases and a polymorphism in clinical manifestations: a primary phase with chronical migrans erythema and articular signs (80% of cases), a secondary phase of heterogeneous and lymphatic dissemination, inaugurated by flu-like symptoms and associating neurological, cardiac or articular signs that could become chronic [2]. Each of these attacks could be inaugural or/and isolated [3]. Concerning the anamnesis, only 30% of patients remember a tick bite [4].

The heterogeneity of presentation in Lyme disease includes the serodiagnosis as a central investigation for confirmation [5]. Hepatic impairment due to Lyme disease, including hepatitis and hepatomegaly, is inconsistent, commonly found in early stage but often asymptomatic and with plasmatic manifestations [6]. A moderate hypertransaminasemia (2 to 3 N) could be noted, predominating on the ALAT. This hepatic biologic involvement is present in 27 to 66% of cases [7]. This can be explained by a systemic, lymphatic migration of the incriminated bacteria and a secondary hepatic sequestration [8]. To our knowledge, this physiopathological evolution to explain liver disorders has never been described for pancreas but is probably similar. 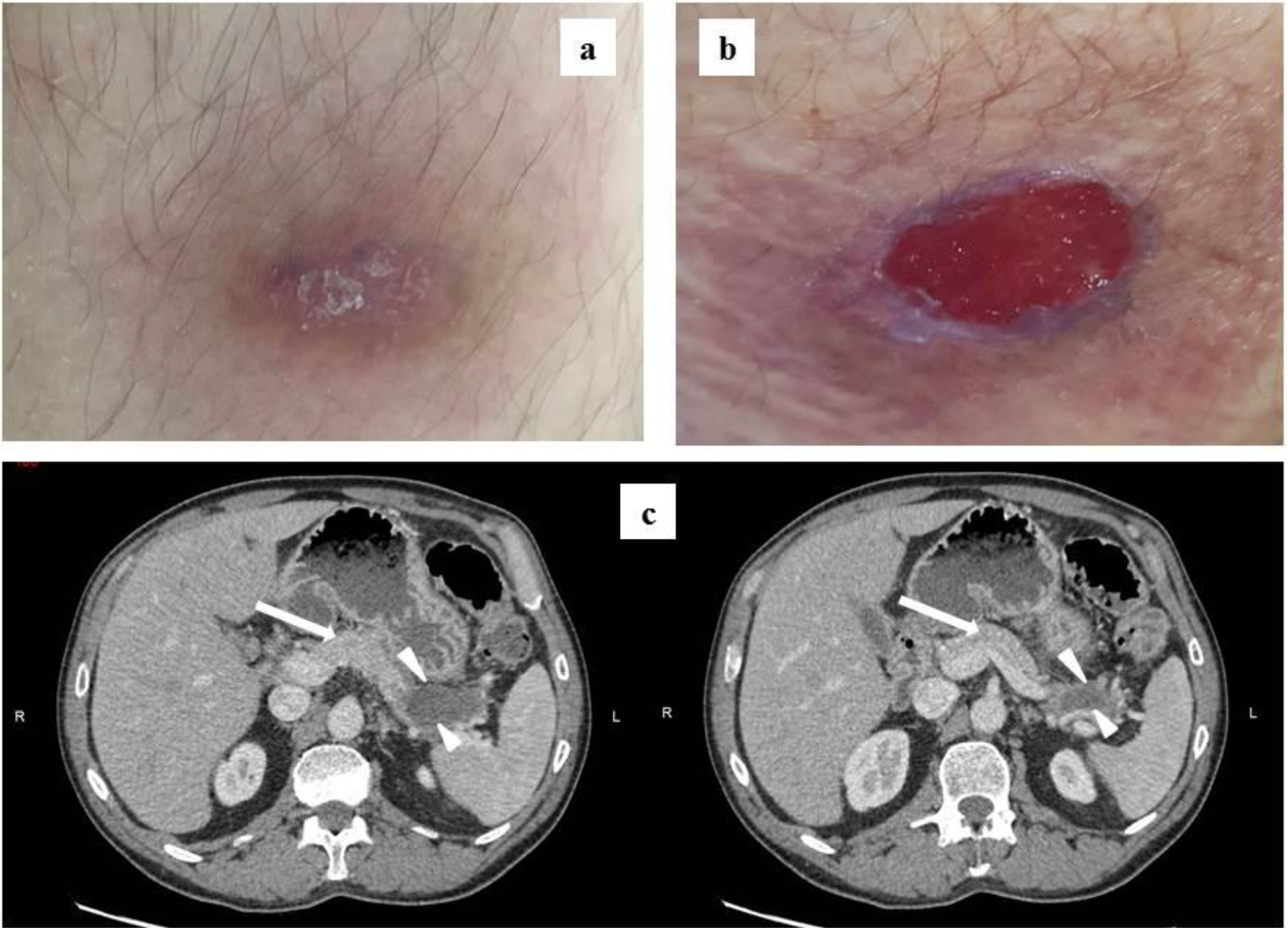 Regarding the treatment of Lyme disease, the cycline are recommended for the uncomplicated forms. An antibiotic treatment with cephalosporins could be considered for cardiac, neurological or complicated cases [2]. The evolution is favorable in 85% of patients, including hepatic acute injuries [9].

In our case, the skin lesion associated with a supposed tick bite, the anamnesis, the absence of other cause of pancreatitis, the favorable evolution under antibiotic treatment and especially the strong positivity of the serology are in favor of a Borrelia burgdoferi infection.

The authors report the first case of pancreatitis revealing a Lyme disease. Clinical, biological and evolutionary findings support the responsibility of Lyme disease in the pathogenesis of our pancreatitis case.

The authors thank Dr Sommabere from the department of bacteriology for his contribution on the project.